We left Andrea and Jeff to explore more of the ANZAC history around Ypres before they headed to the UK and we headed to Waterloo, or specifically La Butte de Lion where the battle took place in 1815. We were a little disappointed after our experiences at Ypres, here the 21st century visitor centre was being paid for by the €20 per person entrance fee to climb the man made hill that wasn't there in 1815 to look over farm land. I can't understand why Napoleon gets a big mention, but Wellington's, " near run thing" was Napoleon's swansong.
We travelled on toward Luxembourg and stopped overnight at the pretty village of St Hubert, again very thoughtful local people providing a free aire for motorhomers. An easy drive into Luxembourg the next day with an empty tank for the diesel @ 97 cents\litre!
We had chosen a campsite outside the city with washing machines so we could do the necessary; it also had a cycle path nearby so next day we rode along the river route into the city.
The city of Luxembourg is very pleasant.
I say this because it's really tidy and quiet and has lots of new exhibitions telling everyone how pleasant Luxembourg is; only two beggars that we saw. It's a bit like a film set, waiting for the director to shout 'action'! 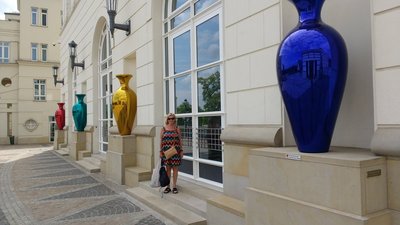 Our 20k round trip cycle ride was the best bit of the day, although we explored the Grund and the Haute city and took the bikes up in a lift and had some decent local beer at lunchtime. 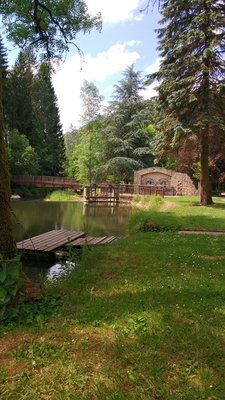 We got back to the site just in time to put the bikes up and cover them before a belting thunderstorm poured so much water down I had to rescue not only our awning but next doors as well, good job it was still 25 °C. At least the multicoloured pigmy hippos next to the campsite didn't mind it.
We were getting back to more continental eating, more fruit, cold meats, salads with even more fruit. I'm writing this still sat outside at nearly 22:00, lovely long evenings and we have just found a lovely rosé for €1.99, quel domage!
Back into France next morning, all of 50 miles before we overnight by the Moselle, a marina aire that has everything including free washing machines and we just did ours! Sitting by the river we are being flown over by 8 to 10 herons and at least 6 eagles, plus several storks, lovely spot.
We plan to revisit Thaon la Voges where we spent a lovely weekend 4 years ago, so we are being brave and going back in the hope it's just as good.