We were heading towards a campsite in the hills in southern Slovakia called lazy days when jacqui shouted "motorhomes!" and I took the next left a bit quick, well the local driver shouldn't have been that close! We drove across a track and found the lake that Jacqui had briefly seen, a large logging lorry gave way to us on this narrow track, then it was on to a grass area around the lake. I asked a fisherman about parking and he motioned us to drive round the other side of the lake, probably to get rid of us. We stopped next to what looked like a few tents and caravans obviously here for more than just a days fishing.
I walked over and said hello and an old chap introduced himself as Pavol, or Paul, he had had a couple and was very friendly; a young guy Filip and his family told us there was no problem with parking overnight, Filip is learning English at school.
We set up and Pavol popped over to say hello to Jacqui who then started to cook roast beef, Yorkshire pudding, roast potatoes, the works. Before we had a chance to eat Filip's family had walked with a bottle of local vodka and some homemade sheep's cheese. Well we had to respond with the rhubarb and custard vodka we were given by Aly and Richie and it turns out rhubarb is rhubarba in Slovakian, who knew?
Pavol had woken up by this time after his afternoon snooze, I was handed a tin of local beer and someone else got out the slivovitz which even Jacqui had a go of.
Our Sunday roast was a bit delayed and appreciated after that drink, 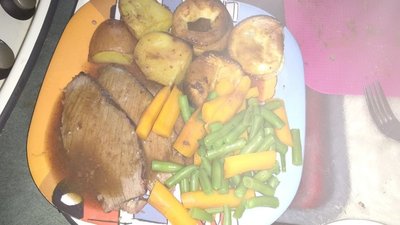 but the welcome these people gave us was amazing and unique in our travels. We have often shared a glass or two with fellow travellers but never a whole local family turning up at our van like that. 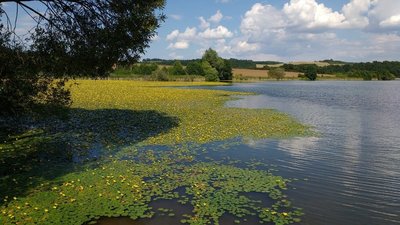 We left next morning with lots of hugs and a promise to sent Filip our blog and we encouraged him to keep up his English. We only had 30 miles to go to the campsite we had aimed for the previous night, when we got there we were told it was full!
Good job we were prompted to drive to that lake!

Posted by cjpolley 09:24 Archived in Slovakia

I'm sure you stopped at that campsite for the booze.

Can't believe you said that Brett