After being told the site was full we stopped in a field to see where we would be going next, it is the one little problem of day to day planning, sometimes we come unstuck, but, just like the unexpected lake the day before, there is something great around the corner. 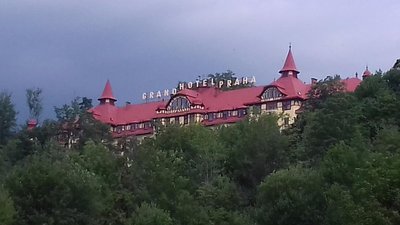 And there was, after 26 months and over 200 campsites we have found the best one, small, in the hills, swimming pool, great showers and washing up, Internet, the works. This site is run by a Dutch couple who used to be campers so they know where to put hooks in the showers; the whole site has a rustic feel and the owners have made everything in it, from a pretend byre in the showers to a quirky way to support a hose for the loo waste.Jacqui was in her element as they had cats, dogs, baby chickens and rabbits. Lots of little extras like wild flowers on picnic tables and even their own jam and Slivovitz in beautifully decorated jars and bottles. They even had a zip wire,
This area is the low Tatra or foothills I suppose, so we took a walk along tracks the site owners suggested, there are maps for campers to use and they have even marked the routes around the hills by adding signs to trees. Our walk ended at the pub, 95 cents a pint and we caught the bus back.
We stayed a couple of nights knowing there are more great sites around the corner and we headed for a lake again. This time, however, the beaches were crowded and there were such attractions as Aquapark Tatralandia and Baby Play Park, we decided to avoid these and were looking for somewhere to turn round when we drove through a village and happened upon a car park for a local hiking trails. There was a pub and a football pitch and we got charged €3.50 to park overnight.
Next morning we walked up to the waterfall and back, 3.5 hours, up a dried up stream bed and across bits of rock holding on to wires and chain. I'm sure the waterfall is more dramatic in early summer but it was a good walk. 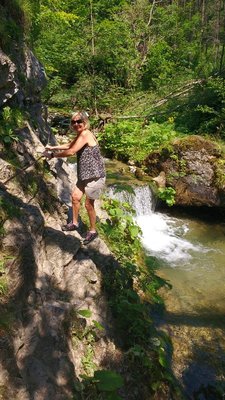 Expecting our 3 in a row to have finished our run of great sites, we headed higher into the Tatry Mountains and drove through a number of lovely ski resorts doing their summer season. We found a stellplatz behind a panzion with a bar and restaurant, electric included, on a roll now!
This village is called Tatranska Lomnica and has some really grand hotels and a small electric railway that we used to go to the couple of local towns of any real size; the return fare was €3 and there wasn't much going on in either town! The fact we have gone higher, now over 2000 feet, means we have cooled off a bit especially at nights.

Posted by cjpolley 22:39 Archived in Slovakia

by Theo and Brett

Sounds wonderful and so picturesque......would be lovely to have the option of cooling down here! Typical school holiday weather....wet, windy and cool.....fingers crossed for a change. Love to you both xxxx