The night before we left the stellplatz, the chef brought us over water melon as we were sat outside our van having an early evening drink, nice chap. We left on a Sunday morning heading east, aware that we would have to choose our border crossing into Poland carefully as the Carpathian mountains get in the way a bit; we had been advised by a Polish chap we met that there are some good drives in the south east corner of Poland.
We stopped en route to a lake at a couple of UNESCO sites, Levoca and Spis Castle; at least we found somewhere to park at Levoca! This is a pleasant walled city, not on the scale of Avila but interesting none the less. Spis Castle is one of the largest medieval castles in Europe, it certainly dominates the landscape, elevated on a natural outcrop of rock on a plain. It was a Sunday and there were loads of people about, but we drove for about a mile off of a main road, passing parked traffic on a narrow road with on coming vehicles; at the car park it was all we could do to turn round! Oh well the castle looked good from a distance. 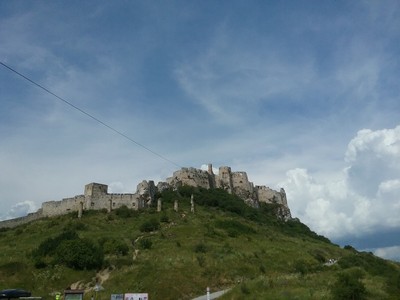 The lake site wasn't far away and the rain had started during several bouts of thunderstorms and traffic started to increase, flowing against us fortunately. I think people were heading home after the weekend, cut a few hours short by the storms. We got onto the lake road and more wiggling about on a narrow lane, until we came to a stop sign and a gate, bit like Blazing Saddles. A bare chested body builder, shaven headed, came over to the van with a money wallet and asked if we spoke German? I explained that we were going to the campsite and asked him if that was OK, I didn't quite get what his reply was but he let us through, I think he was collecting car park money for the nearest resort because when we left a couple of days later, he wasn't there and neither was his sign. 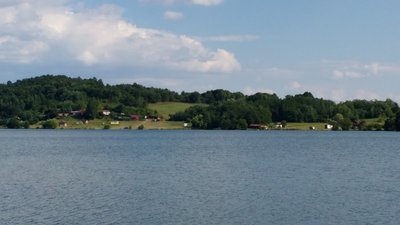 The site was very popular but we arrived as the weekenders were leaving, it had a nice bar and lots of families left enjoying their summer break by the lake; some in semi permanent caravan pitches, some in rented log cabins. We read one review of the site by a Dutchman who said it was a pleasant site but mainly used by 'the locals', how very dare they!
We had a good couple of nights, trying to decide where to go in Poland and exchanging hellos with those locals, one husband even brought jugs of beer back with the bread one morning at 9! We even had to have a push off the slope as it had rained in the night and I couldn't get to the gravelled section to drive out.

Posted by cjpolley 12:09 Archived in Slovakia