It wasn't just to get away from the forecasted rain that we escaped into Spain, we were looking forward to cafe con leche and decent beer prices as well.
Using a slightly different route from France we encountered the usual one horse border towns on either side of a piece of tarmac. There were Spanish shopping in France and French shopping in Spain and for the life of us, we couldn't work out what either national's were flocking to buy!
Parking up overnight on an aire we had used before, we waited out a lot of rain, we were on hard standing but driving out next morning there was sand and gravel in large amounts washed over roads and roundabouts. But the sun was out and the next most important thing was finding a place to watch the world cup and England tackling the world champions, for once I agree with Stuart 'Tubby' Barnes, we should not call them the All Blacks, they are New Zealand nothing mysterious about them just normal human beings.
The city of Girona was on our route and they were preparing for a massive festival when we arrived so we parked up and walked by the river and into the maze of streets and squares. You didn't need to see the TI blurb to know that GoT scenes had been filmed here, the sort of place that if you turned up here for a weekend away, you would not be disappointed. 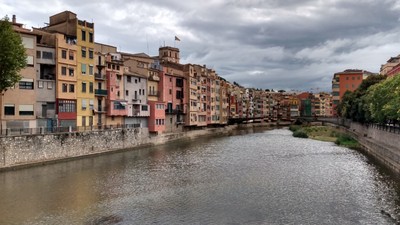 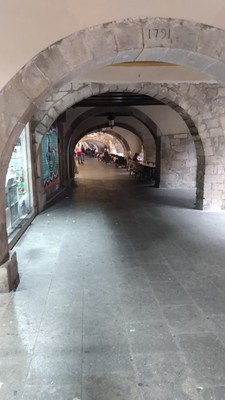 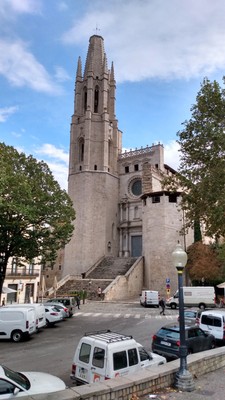 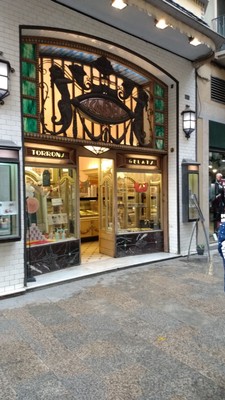 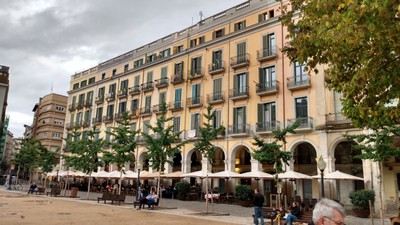 Seeing different places is what we both enjoy doing so finding a nice stop over on the coast at St Feliu was a bonus. We arrived early enough to see 2 towns, 3 beaches, walk 26000 steps and find somewhere to watch both matches over the weekend.

I don't need to repeat what went on that weekend, but to quote Sir Ian McGeechan, I have never seen New Zealand so comprehensively beaten, I rest my case! Just to finish off a perfect day, Jacqui and I spent a couple of hours sunbathing the beach 200m from our van.
Jacqui had decided, after so much rugby, that an aire at a cava vineyard would be a good idea. I already blogged the happy coincidence of the tasting, but it's amazing how cava can turn strangers into instant friends. One Polish couple serenaded us with a song about friendship and how parting would break their hearts!

Back on the boring A7 next morning to head toward Benicarlo and a really friendly stopover we used last year. A market visit on the cards and some cycling along the beach road. We spent three nights there and the only disappointment was the market, lots of the same stuff! We did have a very good lunch in town, Jacqui had her favourite bocarones and I got homemade croquetas, including chicken curry, which was a bit of a shock but very tasty.
We had never visited Alacant and after chatting with our Dorset cava mates, we decided to find somewhere to stay around that area. There were spaces at a camper stop just 200m from the beach and just as close to the new tram system, a good place to explore from. 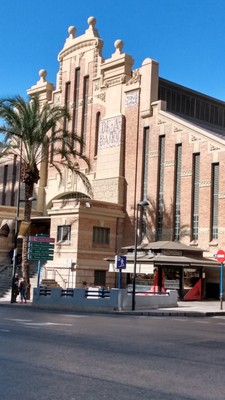 We will dispense with the black gloom that pervaded us on a certain Saturday morning in early November.
Apart from that we really liked this area, great beach, easy to get into Alacant and most places along this coast on the tram, if we were pensionata it would be free as well. The area is so quiet out of season and the few people about this half term week were families enjoying an unbelievable spell of hot weather, up to 30°!
We mooched a local market and visited the campsite the Dorset couple were staying on and all this time Jacqui is looking up Christmas markets in Alicante! Ergo, before leaving we booked for over Christmas, Jacqui even checking if Benidorm Palace had a show on on our anniversary, I will not comment further here!!
We had no intention of stopping before we had seen a bit further along this coast but were getting the feeling that we had experienced the majority of what excites us in Spain. We love the culture here, the towns and cities are awash with places to eat and drink, which takes up most Spaniards' time, how do they find time to work?
We messed about a bit, visited Murcia, eat at Ikea next to the free aire, used another tram system and then headed back to the coast. Deciding on a town we had visited before, we checked out the beach parking we used previously and turns out motorhomes had been moved on from there. A village just outside of Aquilas had an aire with washing machines, no contest!
Next morning, washing done and blowing the breeze to dry, we utilised the magnificent cycle paths down into Aquilas and were met by a typical Spanish seaside town with harbour and two beaches, not the long line of boring apartments we saw last time. Evidently we had come into the town from the opposite side about a mile from the centre. Another nice find on the list, lovely coffee and an added bonus of sardines for lunch.

Janet and David ex of E Hagbourne have a place near Bedar, just down the road from us and invited us to visit, they did warn us of the tight bends on the steep hill to get to their place and I only had to reverse on one corner to get round. The view from their place is well worth it!
We had a couple of days catching up and walked a local mining ruta laid out by the local council in what used to be iron, copper and lead mines. There were a couple of tunnels and via ducts in these extensive, hilly workings. 22000 steps later, we needed the beer and ham, egg and chips lunchtime, Dave's suggestion I couldn't resist. 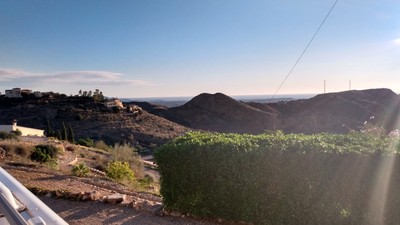 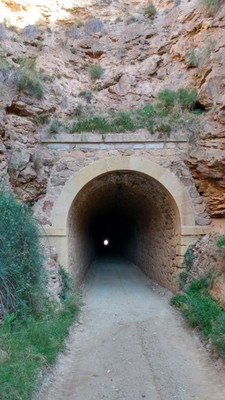 Just to let our readers know, it's not all beaches and ice cream, we have been dogged by high winds that rock the van at night and chases us off the beaches. Bit like sand in the egg sandwiches from my childhood.
We moved on to Vera, a small town we had visited in pre-motorhome days and parked the the bull ring. The market here winds through the narrow streets in the centre of town and we picked up veg cheaply with the rest of the locals and saw the biggest cabbages for sale we had ever seen.
On returning to the van, we checked out the bull ring and were invited, hustled I mean, into a tour by two old chaps we took to be curators. The bull ring is still in use and the last bull fight was in September, to the death! It all seems very savage and the tradition started as cavalry training in the 18th century, how did they jump to killing bulls in quiet a nasty way? 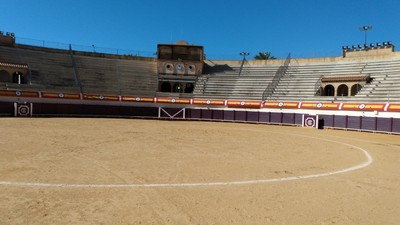 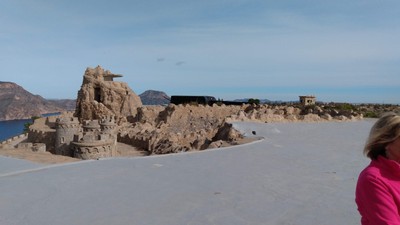 Next couple of nights were beach stops and we visited the site at Mazarron that inspired the book The Guns of Navarone. The installation was built in 1933 on the top of a cliff to protect Cartegena harbour, all the way from Newcastle! The drive up the cliff road was interesting and the views spectacular. The castle that was built around the replacement looked a bit flimsy, but I suppose they had to have somewhere to fly a flag from. 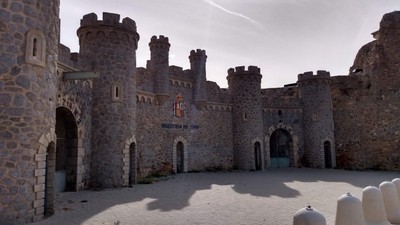 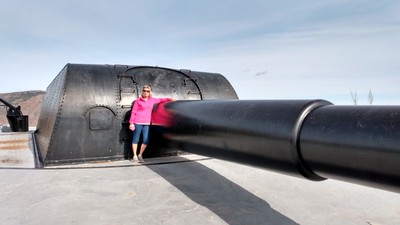 then San Javier for a flying visit with Jacky and Hughie then we headed back towards Alicante, via another couple of nights on the beach. 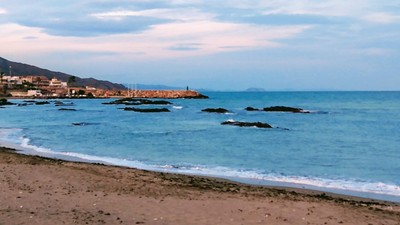 Posted by cjpolley 11:54 Archived in Spain

WOW....You were not kidding about a mega blog! So good to have you back and to join you both on your travels through your wonderful descriptive text Clive. Love to you both xxxx